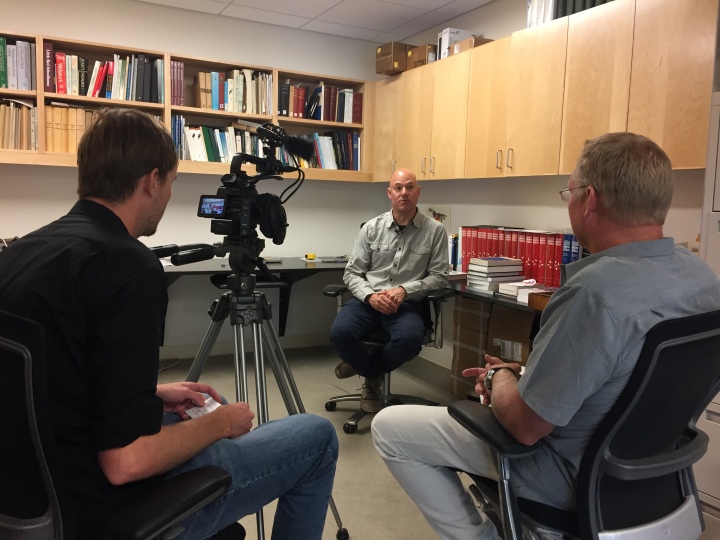 So what does the California Academy of Sciences in San Francisco, California have in common with Nelson and Goldman and our documentary film, The Devil’s Road? Aside from the obvious scientific research and the institution’s exploration of our natural world, the connection was formed on a fortuitous day in 1905. Nelson noted in his 1921 book Lower California and It’s Natural Resources that he “reached Ensenada on July 5th and found the schooner Academy, from San Francisco, in port on it’s way to the Galapagos Islands with a scientific expedition from the California Academy of Sciences.” Nelson had several weeks’ worth of specimens that he and Goldman had collected from northern Baja, and needed to have them shipped to Washington D.C. The crew of the Academy welcomed Nelson aboard, agreeing to stow his cargo, and Nelson enjoyed a fine supper aboard the vessel.

On July 11, 2017, our film crew had the honor of conducting an interview with several of the California Academy of Sciences research specialists. We were met at the back door of the Academy by Katie Jewett of the Press Office. She would accompany us during our tour of the Department of Ornithology and Mammalogy. In the basement of the museum we entered the climate controlled room full of specimen collections. Maureen “Moe” Flannery, the Collections Manager has been put in charge of the hundreds of thousands of bird and mammal specimens and introduced us to several specimens that Nelson and Goldman collected over one hundred years ago.

Jack Dumbacher, Curator of the Ornithology and Mammalogy Department, rounded off the morning with a well-presented perspective of what naturalists like Nelson and Goldman’s fieldwork would have been like. He explained how they would have collected, preserved, and organized their specimens during an expedition. We also learned how valuable these specimens are to science. These thousands of study skins and mounts provide a glimpse into the past, how and where these animals lived, and even what they were feeding on when they were collected. As technology and new research methods change, their value will certainly increase over the next century and beyond.

We would like to thank the California Academy of Sciences for their continued support of Nelson and Goldman’s work and of our film.