For months I was wondering what I had gotten myself into. Lauri and I were planning to fly my single-engine plane over 2,000 miles across the country in late winter; attempt to cross the border into Mexico without getting my plane confiscated and the two of us thrown into Mexican prison; rendezvous with my brother and father who were driving down from the Bay Area; hope that Todd and JT survive their first three steep-learning-curve days of motorcycling through Baja; and have all of us meet at the San Felipe International Airport around noon on March 6th. All in the hopes of good weather on March 7th as the only day that is set aside for aerial filming.

What could possibly go wrong?

This is lunacy. The number of mishaps could be astronomical. The probability that we could pull this off was extremely low. Literally, there was about ten times in the months of preparation where I was ready to pull the plug on our part of the Devil’s Road Expedition — because I couldn’t get the annual inspection complete, I couldn’t get the aircraft ready, I couldn’t find back-up Visual Flight Rules charts for Baja, the aircraft Altitude Indicator failed keeping me from being able to fly on Instruments, I had to do fiberglass repairs on the wheel pants and the luggage doors. . . the list goes on. But we kept at it, getting as prepared as we possibly could, all the while hedging my bet with JT and Todd on how many things could go wrong that would prevent us from making the planned rendezvous.

Armed with a bag of tools, a roll of duct tape, a couple of heavily leveraged credit cards, and $500 in fives and twenties, we took off out of Maryland on March 2nd. A cold front had come through the Mid-Atlantic the day before we left Southern Maryland, giving us a one-day window on the day we were scheduled to depart. It is important to note that, while I am an all-weather pilot, the Cherokee Six is NOT an all-weather airplane – it doesn’t fly in icing, which can be prevalent throughout the US this time of year. (Important note: pilots are obsessed with weather – for a reason). Fortunately, the weather all across the southern part of the United States was dominated by a high-pressure system that gave us great flying weather all the way to El Centro, California, where Lauri and I were planning to meet up with my brother, Eric, and my father, Wayne.

The Cherokee Six purred like a kitten. The weather held out. We met Eric and Wayne in El Centro on the 5th. Unbelievable. Now for the big obstacle: the border crossing. 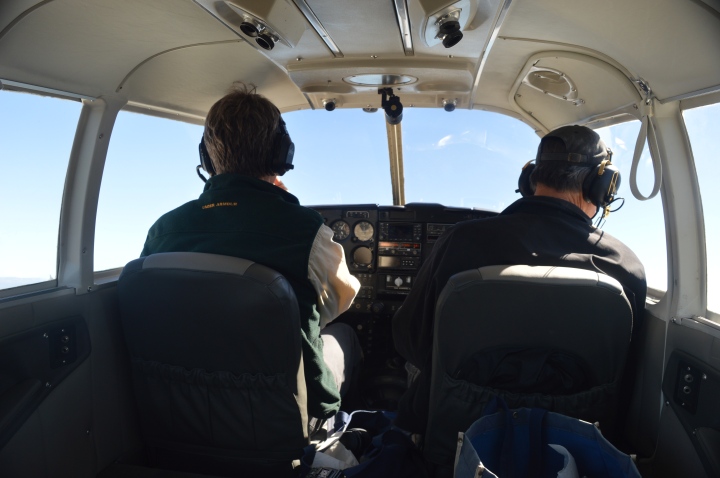 After some issues with customs and the Border Patrol’s electronic system for filing flight plans and crossing the border, we launched solely on the word of Officer Castro in the Calexico Airport. Although it is obvious from the air where the border between Calexico and Mexicali is, there is a striped line on my GPS at the border, but at the exact moment I crossed into Mexican Airspace absolutely nothing happened. I did NOT get intercepted by Mexican military fighter jets. I contacted Mexicali Approach and we continued our way to San Felipe International Airport without incident.

After Lauri and I cleared customs, we were getting the plane tied down and our bags organized for the few days’ stay. The sound of two motorcycles approaching down the long road to the airport was unmistakable — JT and Todd had made it! Not 30 minutes later, Eric and Wayne rolled up in Eric’s SUV, having crossed the border in Mexicali and driven 2 hours down to San Felipe.

Simply put, “Astounding!” We pulled it off. We all made it. In the immortal words of the World Famous Sicilian kidnapper, Fezzini, “Inconceivable!”

Now, all we needed was a good weather day for filming on the 7th and the miracle would be complete.

Meanwhile, Todd has an “owie” on his hand where Nathan spit slag onto Todd’s hand while Todd was holding the motorcycle headlight protective screen with his bare hands that Nathan was tack-welding. I tried to explain to Todd about clamps, lock pliers, and leather gloves, but I think it fell on deaf ears. Despite his whining, he seems to be surviving the healing process so far.

The morning of the 7th brought clear weather and calm air. A minor miracle. We got two-and-a-half hours of perfectly clear weather and unbelievably stable air for aerial filming. This was JT’s first time filming from the air, but he got the most perfect day imaginable. We took the back door off of the plane, strapped JT in, put Eric in the front right seat with his own set of cameras, and launched first thing in the morning.

We shot video of Todd riding his motorcycle out onto a dusty dirt road, climbed to over 11,000 feet to film the Sierra San Pedro Martir Mountain Range, filmed the salt flats of the northern Sea of Cortez, flew down the beach along the Pacific Ocean at 50 feet of elevation, and returned to San Felipe just as the wind and thermals were picking up for the day–all without either JT or his camera getting sucked out of the plane. I did NOT want to have to explain that one to his mother.

A marvel of planning and luck came together to deliver almost two hours of spectacular digital video and countless still photos. The weather gods had shined their light and good fortune upon us! We will have to let the final documentary speak for itself on that fact.

Tomorrow, we attempt to complete our other major goal for the trip: head up into the mountains to seek out the little known and ever-elusive Nelson’s trout. Let the fishing gods be with us for the next two days. Fingers crossed.