If you’re a fan of true crime, you won’t want to miss the release of Anna Flowers’s second edition of ‘Bound to Die: The Shocking True Story of Bobby Joe Long, One of America’s Most Savage Serial Killers”… with my cover! 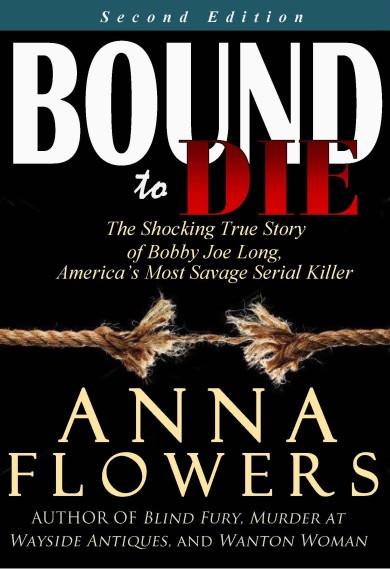 ‘Bound to Die’ is the true crime story of Florida serial killer Bobby Joe Long, who was convicted of the heinous killings of nine women in 1984 in the Tampa Bay area. The killer’s confession of his crimes is haunting, the vividly rendered results of his trials and appeals are equally shocking. Both are recounted in ‘Bound to Die.’

First published by Kensington, NY, in 1995, ‘Bound to Die’ was internationally recognized. It received seven mass media printings and was issued in hardback as a Doubleday Mystery Guild Book Club selection. This second edition features a new foreword on a capital case which is still considered a definitive example of excellent police detection before DNA.

Multiple television presentations have been made based on this book, some including the author’s participation. Shortly after first publication, a documentary based on the case was shown on Medical Detective that aired sporadically for years. In 2012, this story became the pilot for the new show Killer Profile on the Biography Channel.

Read more about the author at www.annaflowersbooks.com