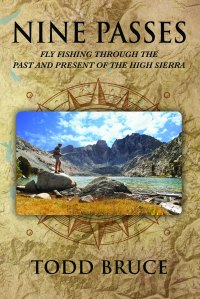 SANTA CRUZ, CALIFORNIA, February 10 – Local author, Todd Bruce, of Santa Cruz will release his debut book, Nine Passes: Fly Fishing through the Past and Present of the High Sierra on February 15, 2015 through Black Swift Press. A book launch party will follow this spring.

Nine Passes, Todd Bruce’s deeply personal account of his 300-mile backpacking expedition through the Sierra Nevada, is informed by the author’s vivid sense of history and enduring love of the land. Retracing the route of Charles McDermand, an outdoorsman and writer whose landmark 1946 travelogue The Waters of the Golden Trout Country sparked a national interest in the region, Bruce draws upon his fly fishing expertise and his keen familiarity with the land to illuminate the subtleties of the Sierra Nevada’s flora, fauna, and topography.

Bruce’s five-week trek took him along McDermand’s seventy-year-old route, hiking the back country, fishing the lakes and streams, and climbing the high mountain passes of trailblazers past—one of whom was Bruce’s great-grandfather, George R. Goldman.

The trout waters he explores are those of McDermand, of George Goldman, and of Bruce’s kin: Bruce’s mother, father, and siblings, as well as his own young self, who fished those same glinting pools in the previous decades. Nine Passes is a collation of more than six decades of change in the Sierra fisheries, the story of a family, their bonds and their memories, the techniques and practices of the fly fishing artistry, and the shifting human attitudes that have sculpted these granite-laden mountains.

As an experienced backpacker and outdoorsman, author Todd Bruce has cultivated a deep knowledge and endless love of the natural world. Starting at age four with a fly rod in his hand, his life lessons progressed through the teachings of his family and mentors, and eventually he achieved the rank of Eagle Scout.
His passion for the outdoors led him to pursue a degree in forestry at Humboldt State University. His thirty-two year career as a firefighter began with fighting wildfires for the United States Forest Service. In 2011, he retired at the rank of captain from Santa Clara County Fire Department.
He continues to chronicle his expeditions and share his mastery of the backcountry. Bruce currently lives in Santa Cruz, California.

8 thoughts on “NEW RELEASE: “Nine Passes: Fly Fishing through the Past and Present of the High Sierra” by Todd Bruce”